Traditions of symbolic reflections of the world are evolving and developing throughout the whole history of mankind. Historical records affirm that conventional images of concepts and ideas embodied in pictures as symbols which replace these notions and ideas appeared in old times. They had sacral, legal, or proprietary content behind them.

A coat of arms is an image established according to the laws of heraldry. It is a symbolic, cognitive and lawful sign which is performed and approved according to certain rules. It is a permanent characteristic mark of a person, family, society, or institution, locality, region, or state. Coats of arms appeared as personal knights’ emblems in Western Europe at the turn of the 12th--13th centuries. They were inherited and passed on from generations to generations. Coats of arms are depicted on flags, seals, weapons, buildings, official documents, etc.

Flags (banners), pieces of cloth of certain shape, colour, and size, attached to a rod on one side, with or without emblems pictured on them, were used even in the countries of Ancient East. Sources provide us with the information about the flags of ancient China, India, Persia, and other nations. The oldest of them date back to the 12th century B.C. It was the time when white flags have already been in use China.

European universities have their own symbols since the Middle Ages. This tradition was broken in the Soviet times. Now in Ukraine the almost forgotten tradition is being reborn. Looking forward to the 55th anniversary of Uzhhorod National University, the symbols of the university, namely the coat of arms, the flag, the anthem, the emblem, and the logo were elaborated by the specialists of the university and adopted by the Academic Council. The emblem and the logo were approved on May 29. 2000, and the coat of arms, the flag, and the anthem were approved on September 28, 2000. The symbols of our university are aimed at representing Uzhhorod National University both in Ukraine and in the international arena.

THE COAT OF ARMS AND THE FLAG OF UZHHOROD NATIONAL UNIVERSITY

DESCRIPTION THE COAT OF ARMS OF UZHHOROD NATIONAL UNIVERSITY

The shield of the coat of arms is neo-French (as in the emblem of Carpatho-Ukraine), three-componental and blue-coloured. The hem of the shield and the lines which divide it into three parts are golden.

The right heraldic part depicts two silver (white) edelweiss flowers. The edelweiss as a local flower personifies the Carpathians. It is also a symbol of courage, purity of thoughts, devotedness, and longevity.

The left heraldic part contains two silver (white) goose feathers which are crossed. Feathers are the ancient symbol of the intellectual activity.

The emblem of the university – silver universum, a symbol of universality -- is depicted in the central part of the coat of arms.  It designates the professional activities of the university as a scientific and educational institution which trains specialists in fundamental disciplines.

The gold (yellow) trident is placed above the shield.

The shield of the coat of arms is held by two stags – shield-bearers, their profiles facing the shield. Stag is an inhabitant of the Carpathians, the symbol of strength, beauty, and nobility.

The motto of the university is printed with silver letters on the gold ribbon under the shield. It states “The more we know – the more we can”. The language of the motto is Ukrainian.

The emblem of the university is made in a palette traditional for Ukraine and Transcarpathia. Blue colour denotes honesty, devotedness, and excellence. Gold colour is a symbol of faith and justice. Their combination is typical for the folk art and regional symbols. Silver embodies hope, truthfulness, and generosity. This noble metal is often used in historical coats of arms and on regional emblems. The Silver Land is a widely used poetic name of Transcarpathia. 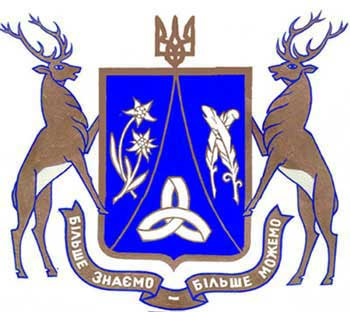 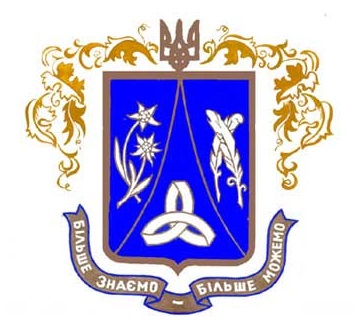 THE DESCRIPTION OF THE FLAG OF UZHHOROD NATIONAL UNIVERSITY

The flag of the Uzhhorod National University is an orthogonal cloth bordered with blue and yellow triangles which alternate each other.

The coat of arms is depicted in the central part of the flag.

The ratio of the flag height to its length is 1:2.

The white colour of the flag embodies Transcarpathia which is also called the Silver Land.

Blue-and-yellow border emphasizes the belonging of the region to the state while the coat of arms points out that the flag is the symbol of Uzhhorod National University. 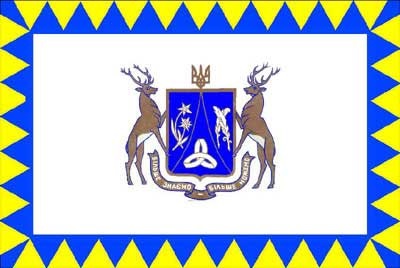 THE EMBLEM OF UZHHOROD NATIONAL UNIVERSITY

THE DESCRIPTION OF THE EMBLEM

The emblem of Uzhhorod national university is a blue circle with a silver (white) surrounding which contains an inscription “Uzhhorod National University” in gold letters.

The circle is crossed by a contour line symbolizing the Carpathian Mountains.

At the background of Carpathians is the golden sign of universality is depicted in the form of a trefoil with silver (white) inscription “Universitas” – “University” meaning a higher educational institution with faculties for training specialists in fundamental disciplines.

The year of the university establishment is given in gold letters under the trefoil.

The emblem has a symbolic character. The circle is the sign of the sun and protection. It symbolizes the professional orientation of the University as a scientific and educational institution which trains specialists in fundamental disciplines.

The blue colour is one of the national colours of Ukraine and indicates honesty, loyalty, and excellence. Gold is a symbol of faith and justice. The combination of these colours is peculiar to folk art and regional symbols. Silver embodies hope, truthfulness, and generosity. This noble metal was often used in historical coats of arms and on regional emblems. The Silver Land is a widely used poetic name of Transcarpathia.

THE DESCRIPTION OF THE LOGO OF UZHHOROD NATIONAL UNIVERSITY

The logo of Uzhhorod National University is a horizontally oriented yellow ellipse with a blue contour. Inside the ellipse there is an acronym UZhNU done in the same blue colour as the outline (the contour line) of the logo. One of the letters of the abbreviation is combined with a stylized image of a person reading a book, symbolizing a higher educational institution. The book is conveyed in silver (white) colour.

The blue and yellow colours of the logo are Ukrainian national colours. The silver (white) colour represents Transcarpathia, which is also called the Silver Land. 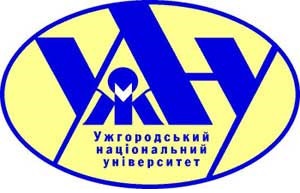 Approved by the Academic Council of Uzhhorod National University

Article 1. The symbols of the university (coat of arms, flag, anthem, emblem, logo) are approved according to the given description.

Article 2. The right to use symbols is given to the rector, the structural units, and the students’ self-government of Uzhhorod National University.

Article 3. The symbols of Uzhhorod National University are used in official documents of internal use, in correspondence with enterprises, institutions, organizations and private persons, in university publications, at scientific, educational, social, cultural, sports, and recreation events involving the representatives of the University.

Article 4. Production, copying, and usage of the university symbols without the rector’s permission are prohibited.