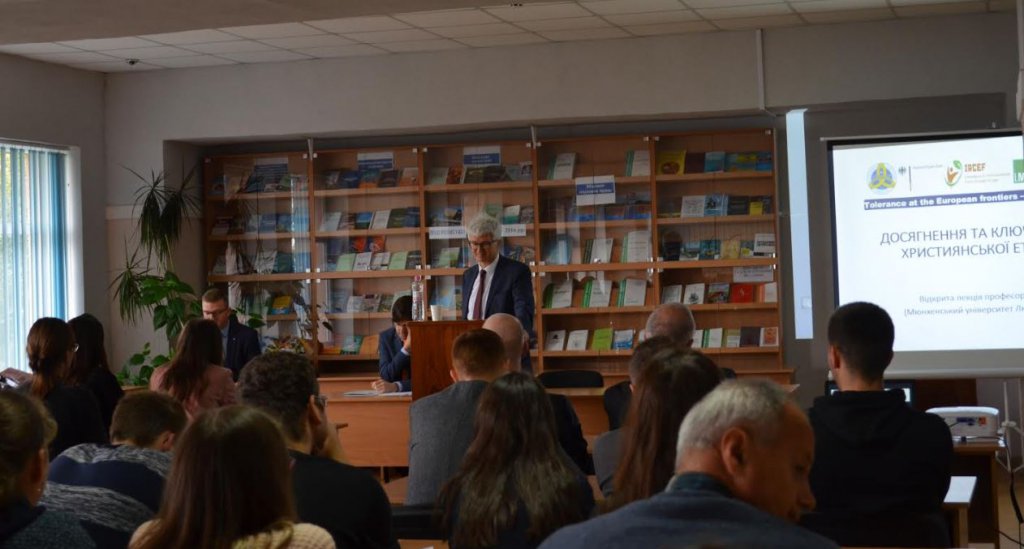 On Wednesday, October 3, 2018, a series of open lectures for students of UzhNU took place at the Faculty of Social Sciences as part of the project "Tolerance at the European Frontiers: the Dimension of Ukraine".

The first one to deliver his lecture was an acknowledged scholar, Ludwig-Maximilian University professor Dr.Markus Vogt (Munich, Germany), a Catholic theologian and a professor for Christian social ethics. The topic of the lecture was "Achievements and Key Messages of the Christian Ethics of Peace". When speaking to students, Markus Vogt analyzed complex processes and challenges of establishing the ethics of peace in Christianity.

Another scholar Dr.Joachim Klose delivered his lecture on "What's wrong with the right-wing populism? - Experience of Germany with the erosion of tolerance through PEGIDA, AfD and the events in Chemnitz." In particular, he noted that the issue of the German populist parties arose from the migration crisis in the EU. According to the scholar, the growth of the right-wing populist sentiment is a wake-up call for Germany and the European Union as a whole.

Other scholars also delivered their lectures, including Lars Schaffer ("Intercultural and Interreligious Tolerance based on Remi Brague's European Philosophy") and Arnd Kuppers ("Social Market Economy - a Program for Social Balance and Peace").