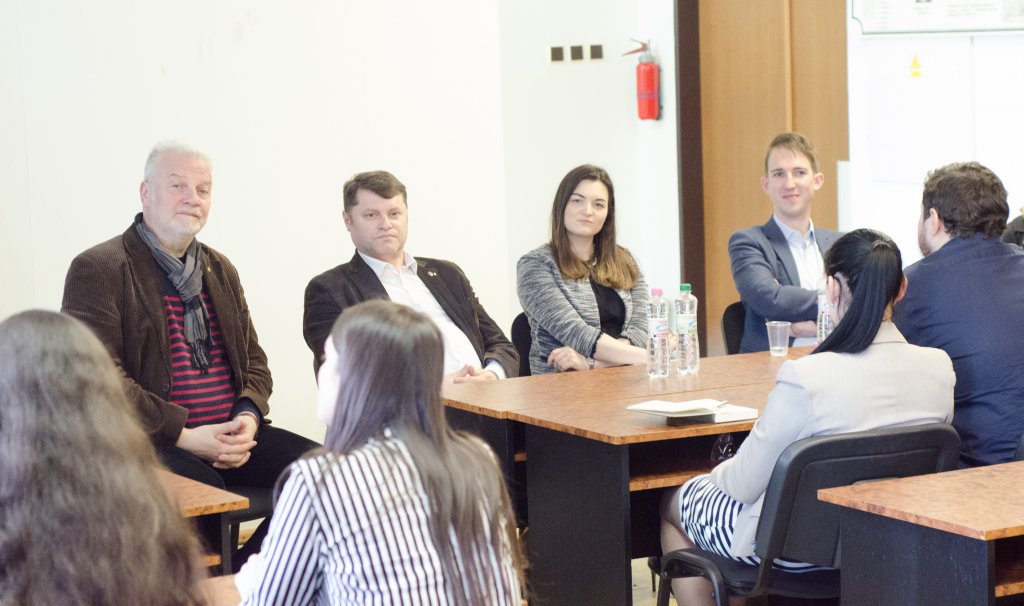 On Tuesday, April 10th, 2018, Uzhhorod National University hosted the First Secretary of the British Embassy in Ukraine Robert Urtuisen Dunn, the representative of the Ministry for International Development at the Embassy Rachel Williams and the project coordinator of the Policy, Economy and Public Affairs Department of the Embassy Svitlana Yavorska. They met with the students of UzhNU and told them about the peculiarities of diplomatic work and also about Great Britain and its relations with Ukraine.

Thus, UzhNU students began with general questions concerning the work of diplomats in Great Britain and guests’ own experience. Robert and Rachel told the students what attracted and inspired them. First of all, it was the opportunity to travel, meet new people and get acquainted with new cultures. Rob says that, unfortunately, very few people in the UK know much about Ukraine, its location, and peculiarities, but owing to the recent events, the situation has changed a bit. "Personally, I did not know anything about Ukraine before school. Of course, in my geography lessons, I learned where it was located, but I did not imagine anything specific. I am currently working in Kyiv, and I really like Ukraine. We are far from the capital today and your city is close to the borders with the neighboring states, and we can feel their tangible influence, but it's clear that we are in Ukraine and I don’t mean the condition of your roads." Says the first secretary of the British Embassy in Ukraine Robert Urtuisen Dunn.

In addition to general issues, students paid a lot of attention to the relations between Ukraine and Russia, as well as Great Britain and Russia. Thus, Rob told the audience that he had been working in Russia for three years before arriving in Ukraine, and he could state precisely that there was no democracy in Russia: "No one can freely express their opinion in Russia. I have been observing these processes with a certain curiosity, and, fortunately, didn’t observe them in Ukraine. Russia's government is keeping the entire population under full control and trying to manipulate the world with the help of misinformation, propaganda and external media. Of course, there are no perfect countries, but Russia does not want to play according to international "rules", which regulate the relations and are observed by all other states."

Students of UzhNU were also interested to hear more about the royal family and Britons' attitude to it. They told the guests about our country’s pressing issues, and, finally, learned about various educational programs allowing them to study in the UK.