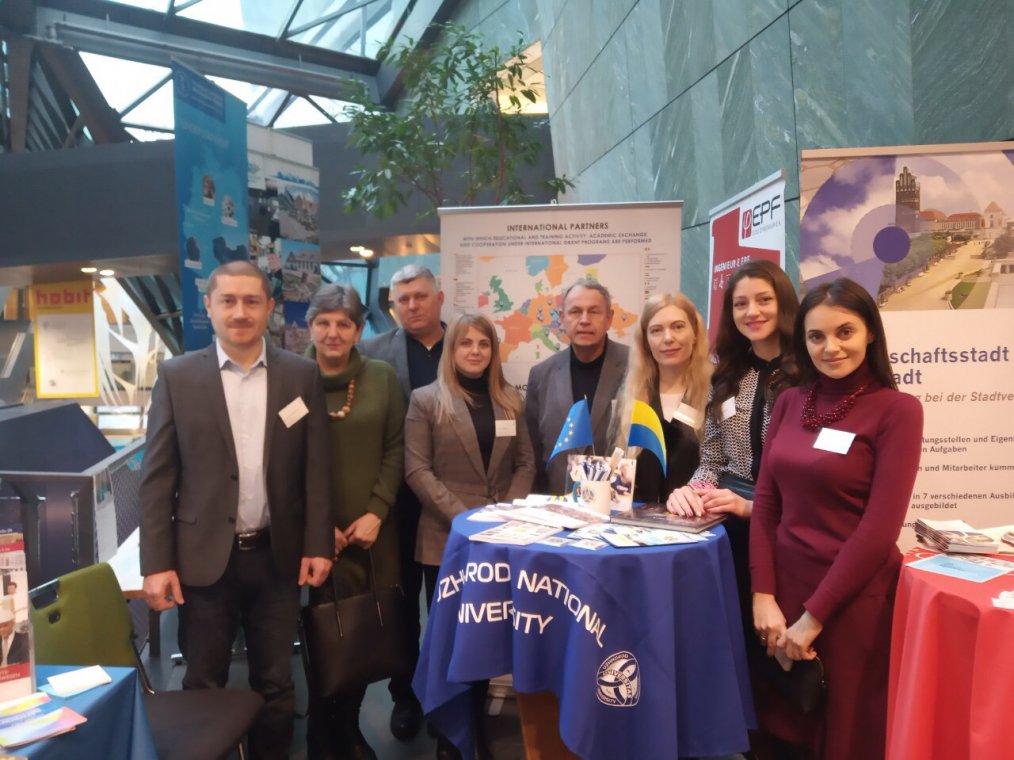 The German city of Darmstadt, a sister city of Uzhhorod, annually gathers the representatives of the leading German universities at the hobit Regional Education and Training Exhibition. This year's exhibition, which was held last week, was organized at a very high level. Uzhhorod National University was invited to it by the city administration of Darmstadt as a special guest.

The delegation of UzhNU, headed by the vice-rector Myroslava Lendel, presented  the achievements of the university in the fields of reseach, training and project implementation with distinction. In particular, the mayor of Darmstadt Jochen Partsch, the representatives of the local government, and the head of the department for international intercultural cooperation of the municipality of Darmstadt Patricia Latorre expressed their deep interest in continuing the cooperation and implementation of the joint projects according to the following scheme: the municipality of Darmstadt + Darmstadt University of Applied Sciences + Uzhhorod City Council + Uzhhorod National University.

Ms. Patricia Latorre is convinced that the successful cooperation between local self-government bodies and the university scientists will solve the most urgent problems of the modern cities, including environmental protection, household waste management, drinking water purification, etc. The members of the delegation of UzhNU assured their German colleagues from the Darmstadt University of Applied Sciences that they were ready for the implementation of joint project.

It is worth mentioning that German students got interested in semester studies at Uzhhorod National University under the Erasmus + program. Therefore, UzhNU is hoping for the increase of cooperation in the area of academic mobility with Germany. The representatives of the Department for International Relations of UzhNU O.Svezhentseva and O.Pantio, spoke about the peculiarities of academic mobility programs, the double diploma program, the achievements of UzhNU in the field of the international activity and the prospects of Uzhhorod National University.

While presenting UzhNU, Myroslava Lendel called the representatives of the universities of other sister cities for cooperation. As a result, a preliminary agreement about the academic exchange and implementation of joint projects was reached with the French university of the city of Troyes.

The details of the cooperation agreement between UzhNU and the new French partner will be discussed at the next International Consortium of Universities, which will be held in Uzhhorod in April 2019. At this meeting of the consortium we will talk about the peculiarities of cooperation between local self-government and universities, therefore, the mayors of the sister cities of Uzhhorod and the heads of institutions of higher education working in these cities will become its participants.